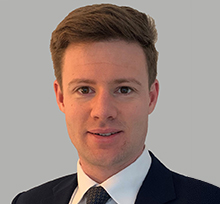 Tom McDonnell is an Associate in the Firm's Litigation & Arbitration Practice Group in the London office. Tom's practice is focused on resolving commercial and regulatory disputes through litigation, arbitration and all forms of alternative dispute resolution. He has broad final hearing experience, having represented individuals and institutional clients in the English courts, the Dubai International Financial Centre court, and the Qatar International Court, as well as in both domestic and international arbitration. Tom has experience of arbitrations subject to the ICC, LCIA, DIFC-LCIA and DIAC arbitration rules.

Tom's current work includes acting for the claimants in Commercial Court quantum proceedings relating to the scope of an account for profits, which is listed for a six-week trial in Autumn 2021.  Tom is also acting for three former directors facing allegations regarding the sale of a subsidiary to a connected party and two director respondents to an unfair prejudice petition.  Both cases allege various breaches of the directors’ duties under the Companies Act 2006.

Tom has unique experience of private-sector redress schemes arising from alleged mass torts, having acted for Manchester City Football Club on the design and implementation of its Survivors’ Scheme responding to allegations of historic sexual abuse. Following that instruction, Tom was part of a team that delivered evidence to the ongoing Independent Inquiry into Child Sexual Abuse in support of a national dispute resolution scheme to resolve historic sexual abuse claims.

Advising the claimants in Commercial Court quantum proceedings relating to the scope of an account for profits (listed for trial in Autumn 2021).

Advising three former directors facing allegations of breach of duty regarding the sale of a subsidiary to a connected party.

Advising an insured in respect of a civil liability policy dispute arising out of a remediation project to pay redress to customers as a result of the mis-sale of defined benefit pension transfers.

Advising in respect of an expedited Commercial Court trial raising issues of interpretation, implication and rectification of restrictive covenants in a financial brokerage agreement.

Advising in respect of an application to strike out a Part 20 claim intended to cause certain disputed issues subject to an arbitration clause to be litigated in the High Court.

Advising a Dubai International Financial Centre based private investment firm in its defence of a breach of contract claim arising out of a lease subject to DIFC law.

Advising a Qatar based health insurer in its defence of a claim by an insured.

Representing a Dubai based property developer in its defence of a claim arising out of an English law governed licensing agreement relating to a landmark property development in Dubai.