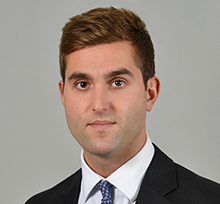 Theodore Elton is an Associate in the Firm's Litigation & Arbitration Practice Group.

Theo has experience in a wide range of general commercial and international dispute work. He has acted and continues to act in numerous complex civil fraud cases involving Russia/CIS and the Russian banking sector before the Commercial Court. In arbitration, he has acted in a variety of disputes concerning the oil and gas sector in West Africa and the Middle East, as well as in disputes involving the Saudi Arabian banking sector. In addition to commercial work, he has also acted in matters concerning extradition/asylum and in defamation proceedings before the English Courts.

Acting for an insured in three related arbitrations on the Bermuda form.

Acting in an LCIA arbitration relating to the oil and gas sector in Equatorial Guinea.

Acting in an ICC arbitration relating to the oil and gas sector in Nigeria.

Acting in an ad hoc London seat insurance arbitration between a Turkish party and a Danish party.

Defending a Cypriot company in a claim relating to the repayment of a loan agreement.

Enforcement of an ICC Award under section 103 of the Arbitration Act, where the Award debtor is resisting enforcement.

Acting in a defamation claim by an A-list actor against a UK tabloid.

Advising on a number of related defamation matters concerning allegations against an A-list actor.

Advising in relation to claims against a high street bank concerning the mis-selling of financial products.