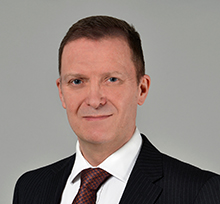 Richard Obank is a Partner and the Practice Group Leader of the Firm's Bankruptcy & Corporate Restructuring Practice Group in the UK. Richard practices in the area of corporate restructuring with particular expertise acting for boards of directors in financially distressed situations. He advises regularly on distressed M&A transactions, debt and capital restructuring and work out situations, often involving significant cross-border issues, where the objective is to ensure the best outcome for stakeholders., and wherever possible, avoid a damaging insolvency process.

Richard acts for corporates, private equity investors, funds and financial institutions. He regularly advises turnaround professionals and accountants operating in the restructuring and work out arena and is highly familiar dealing with and advising on UK insolvency processes, contingency planning and options analysis. Richard also has extensive experience acting for boards of directors and liquidators on solvent liquidations.

Richard has hands-on experience as a board director and charity trustee in debt restructuring scenarios and overseeing operational turnarounds. Richard is known in the market by clients as a veteran practitioner with over 30 years of experience acting for a broad range of stakeholders. He is recognised nationally for his work and contribution in the turnaround, restructuring  and insolvency sector and has won numerous industry awards and accolades.

Richard is a member of the UK Restructuring team recognised by ILFR1000 as a leading practice.

In recent years, Richard has worked on the following matters:

Acting on behalf of the administrators of various professional football clubs in England and Scotland and also for their administrators (successful restructurings, company voluntary arrangements; and disposals involving the Takeover Panel).

Acting for senior secured lenders on the refinancing and restructuring of the UK’s mining industry.

Acting for the administrators of numerous high street fashion retailers in the UK.

Acting for senior lenders on the restructuring and pre-packaged sale of an international drilling group in the oil and gas sector operating in 22 jurisdictions.

Acting for a listed company in the automotive components sector on its debt and equity reorganization, pension scheme restructuring, and disposal of US subsidiary.

Acting on the restructuring of a leading UK hotel and leisure group and subsequent solvent liquidation following a successful sale to private equity investors.

Acting for a national probation and rehabilitation services provider and solvent sale to a private equity investor involving the UK government.

Acting for the administrators on the pre-packaged sale of Europe’s largest printing group.

Reorganization and pre-packaged sale to private equity sponsor of a leading bathroom appliances group with operations across the UK, Canada, and the US.

Acting for a private equity investor on the solvent liquidation of a leading drilling technology business in Scotland.

Acting on the debt restructuring and turnaround of a leading UK producer of static modular homes.

Acting on the solvent liquidation of a leading UK house builder following a successful sale of the group to a private equity investor.

Acting for a leading UK wholesale and retail grocery business on its operational turnaround and refinancing followed by a scheme of arrangement to effect a sale to new owners.

Acting for the administrators of a UK discount retail operation with over 350 stores.

Acting for the administrators of Europe’s largest suppliers of merchandise and equipment in the golf sector.

Acting for a PE sponsored listed company in its bid for a soft furnishings retailer.

Acting for the administrators of a leading womenswear fashion brand and combining this with a Chapter 11 filing to liquidate stock in the US.

Acting for the administrators of a global fast fashion brand and combining this with a Chapter 15 filing to liquidate stock in the US.

*Some of the above matters were handled by Richard prior to joining Brown Rudnick.