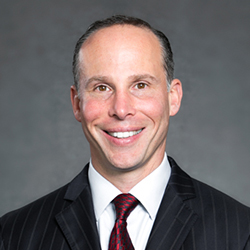 Michael Winograd is a Partner in the Firm's Litigation & Arbitration Practice Group. Michael has over twenty years of experience representing large corporations and financial institutions, as well as their directors and officers, in high stakes litigations. His practice includes a broad range of commercial, bankruptcy, securities, and other complex civil litigation, as well as regulatory proceedings and internal investigations.

Michael has litigated in federal and state courts throughout the United States and before domestic and foreign arbitration panels and regulatory agencies. He has successfully litigated matters through judgment, negotiated settlements, and represented clients on both sides of expedited applications for emergency relief. He also routinely counsels entities and their boards on strategy and risks in connection with potential disputes and transactions.

For the majority of his first two decades of practice, Michael was a litigator at Wachtell, Lipton, Rosen & Katz and, before that, Sullivan & Cromwell LLP. He has been an adjunct professor of law at the Fordham University School of Law since 2003, where he teaches Legal Writing and Research for LL.M.s. Prior to law school, Michael played professional soccer in Israel, coached men’s soccer at the University of Richmond, and co-started up a second division professional A-League soccer franchise. In 2018, he was a second-ballot candidate for President of U.S. Soccer after a national campaign that garnered widespread praise.

Stryker Corporation – Represented Stryker Corporation and certain of its directors and officers in securities class and derivative actions arising from allegations that Stryker failed to disclose material adverse facts about the company’s financial health. The court granted the defendants’ motion to dismiss.

McAfee Inc. – Represented McAfee Inc. and certain of its directors and officers class actions arising from proposed $7.7 billion acquisition of McAfee by Intel Corporation. The acquisition closed on schedule and the court dismissed the case on summary judgment.

European Aeronautics Defense & Space Company (EADS) – Represented EADS and certain of its current and former officers in a shareholder securities class action arising from financial disclosures and public statements issued by the company relating to delays in the Airbus A380 aircraft program. The court granted the company’s motion to dismiss in precedent-setting “F-squared” ruling.

Bank of America – Represented Bank of America Corporation and a number of its subsidiaries in a complex multidistrict securities litigation and related SEC enforcement, New York State Attorney General, and other governmental proceedings arising from alleged market-timing and late-trading in mutual funds. The court approved over 15 favorable settlements of civil claims against the Bank. The governmental proceedings were also settled favorably.