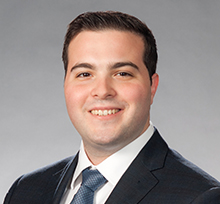 Gerard Cicero is an Associate in the Firm's Bankruptcy & Corporate Restructuring Practice Group. He represents tort victims, bondholders, foreign representatives, official and ad hoc committees of creditors and equity interest holders and post-confirmation trustees in both Chapter 11 and 15 cases.

Gerard is recognized by The Legal 500 US for Restructuring (including Bankruptcy): Corporate.

Prior to joining Brown Rudnick, Gerard served as an intern in the Employment Litigation Department at the New Jersey Office of the Attorney General.

*No aspect of this advertisement has been approved by the Supreme Court of New Jersey. See the selection methodologies for The Legal 500.

Mallinckrodt PLC: Representing the Governmental Plaintiffs Ad Hoc Committee in the bankruptcy cases of Mallinckrodt plc, In re Mallinckrodt PLC, Case No. 20-12422, proceeding before Judge John T. Dorsey in the Bankruptcy Court for the District of Delaware. The Ad Hoc Committee is comprised of (i) 8 States, through their Attorneys General; and (ii) the Plaintiffs’ Executive Committee in the multi-district litigation captioned In re National Prescription Opiate Litigation, Case No. 17-md-02804, MDL No. 2804 (N.D. Ohio) (the “PEC” and the “Opioid MDL”). The PEC is representative of the interests of thousands of cities, counties, American Indian Tribes, hospitals, third-party payors, and other private payors. The Ad Hoc Committee negotiated, on behalf of its members and 42 other U.S. States and Territories, a Restructuring Support Agreement with Mallinckrodt which forms the basis for global resolution of opioid related litigation claims against Mallinckrodt, which was the largest producer of opioids in the United States of America.

PG&E Corp. and Pacific Gas & Electric Company: Representing Justice John K. Trotter, in his capacity as Trustee of the PG&E Fire Victim Trust, and Cathy Yanni, in her capacity as Claims Administrator of the PG&E Fire Victim Trust. From 2017 to 2018, catastrophic wildfires destroyed hundreds of thousands of acres of land in Northern California, killing, injuring and otherwise impacting the lives of tens of thousands of individuals, families and businesses, and destroying residential and commercial properties. Subsequent investigations found that PG&E equipment had started most of the original fires, exacerbated by strong winds in the area. In January 2019, PG&E declared Chapter 11 bankruptcy as a result of the financial challenges caused by its liability in the 2017-2018 wildfires. Brown Rudnick currently acts as counsel for the post-confirmation Trust, Trustee and Claims Administrator formed and appointed to resolve the claims of Fire Victims and compensate them out of approximately $13.5M of consideration (inclusive of cash, stock, and tax benefits). The firm was brought in by the Fire Victims to assist the bankruptcy parties in interest in forming the Trust, and developing the foundational documents effectuating the Trust. Brown Rudnick is charged with protecting the interests of the putative Trustee and Claims administrator as well as ensuring that the Trust is established in a manner that is in the best interests of the Fire Victims. Brown Rudnick advises the Trustee, Claims Administrator and Trust on all matters of administration of the Trust, including claims resolution and distribution.

Purdue Pharmaceuticals: Representation of the Ad Hoc Committee of consenting Governmental & Other Contingent Litigation Claimants in the bankruptcy cases of Purdue Pharmaceuticals, In re Purdue Pharma, L.P., proceeding before Judge Robert Drain in the Bankruptcy Court for the Southern District of New York (the “Ad Hoc Committee”). The Ad Hoc Group is comprised of: (i) 10 States, through their Attorneys General; (ii) 6 political subdivisions of States; (iii) one federally recognized American Indian Tribe; and the Plaintiffs’ Executive Committee in the multi-district litigation captioned In re National Prescription Opiate Litigation, Case No. 17-md-02804, MDL No. 2804 (N.D. Ohio) (the “PEC” and the “Opioid MDL”). The PEC is representative of the interests of thousands of cities, counties, American Indian Tribes, hospitals, third-party payors, and other private payors. The Ad Hoc Committee negotiated the settlement framework with Purdue and its shareholders (the Sacklers) that is the proposed basis for a consensual plan in the bankruptcy.

Insys Therapeutics: Representation of the Plaintiffs’ Executive Committee in the multi-district litigation captioned In re National Prescription Opiate Litigation, Case No. 17-md-02804, MDL No. 2804 (N.D. Ohio) (the “PEC” and the “Opioid MDL”) in the bankruptcy cases of Insys Therapeutics, In re Insys Therapeutics, Inc., before Judge Kevin Gross in the Bankruptcy Court for the District of Delaware. Insys manufactured a sublingual fentanyl spray and was subject to approximately 1,000 lawsuits brought by among others, cities, counties and American Indian Tribes in the Opioid MDL. As counsel to the PEC, the team negotiated, alongside representatives from certain States’ Attorneys Generals’ offices, a consensual Settlement Plan for the benefit of all plaintiffs in the Opioid MDL, including cities, counties, and American Indian Tribes.

Takata Corporation: Representing Professor Green in his capacity as the Trustee of the Takata Airbag Tort Compensation Trust Fund (the “Trust”), established pursuant to the Chapter 11 bankruptcy of TK Holdings Inc., Takata’s U.S. affiliate. The Trust, which holds approximately $140 million, was created in the bankruptcy to provide additional compensation to the individuals who suffered personal injury or wrongful death as a result of a Takata airbag inflator malfunction. The Trustee oversees the management of the Trust and distribution of these funds to personal injury and wrongful death victims.

EXCO Resources, Inc.: Representation of the Official Committee of Unsecured Creditors in the Chapter 11 proceedings of Exco Resources, Inc. and its affiliates, a large public oil and gas company based in Houston, Texas with over 1.2 billion in funded indebtedness.

Implant Sciences Corp.: Representation of the Official Equity Committee and post-confirmation Liquidating Trustee in the Chapter 11 proceedings of Implant Sciences Corp. and its affiliates, a Massachusettes-based public company involved in the domestic security and explosives trace detection market.

Chellino Crane, Inc.: Representation of the Official Committee of Unsecured Creditors for one of the largest crane companies in the Midwest, which specialized in servicing refineries, power and chemical plants. This representation involved overseeing a Section 363 sale of all of the Debtors’ assets and investigating and pursuing causes of action on behalf of the Debtors’ estates.

Arch Coal: Representation of successor indenture trustee for second lien notes in the Chapter 11 proceeding of one of the U.S.’s largest coal producers.

Mt. Gox Co., Ltd.: Representing the Japanese Bankruptcy Trustee of the failed global Bitcoin exchange Mt. Gox, which had been the world’s largest exchange for this digital currency, in connection with the company’s Chapter 15 case in Bankruptcy Court in Texas and related litigation in the United States.