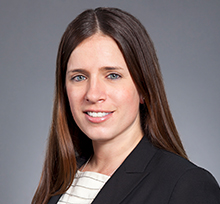 Angela Papalaskaris is a Partner in the Firm's White Collar Defense & Government Investigations Practice Group. She focuses on a broad range of sensitive matters, with particular attention on internal investigations, SEC regulatory defense matters, and DOJ and other cross-border government inquiries and enforcement actions. She has extensive experience in FCPA and anticorruption matters. Over the span of her career in private practice, Angela has advised a wide variety of foreign and domestic clients, including public corporations, privately held companies, board committees, and individual executives in high-stakes matters relating to the FCPA, OFAC sanctions regulations, insider trading laws, as well as securities, accounting, healthcare, and financial fraud. She frequently counsels clients in connection with whistleblower allegations, crisis management, compliance, and corporate governance matters. Angela also has substantial experience in litigating and defending her clients in the complex cases that typically follow and stem from government allegations of fraud. In 2013, Angela was a part of the trial team that successfully defended Mark Cuban in a high-profile insider trading case brought by the U.S. Securities & Exchange Commission.

Successfully represented Mark Cuban during a three-week trial in connection with SEC allegations that Mr. Cuban committed insider trading, prevailing on all charges.

Represented the former Chairman of the Audit Committee for the Board of a Russian telecommunications company in connection with DOJ investigation into alleged violations of the FCPA.

Represented several witnesses in connection with a grand jury investigation into allegations of fraud, money laundering, and FCPA violations.

Represented a multinational oil and gas company and certain of its subsidiaries in the defense and resolution of FCPA investigation by the DOJ and SEC.

Represented an international energy company and its subsidiary in connection with allegations of FCPA violations in Central Asia. The DOJ and SEC took no action against the client.

Represented a major computer software company in connection with allegations of FCPA violations in China. The DOJ and SEC took no action against the client.

Represented a senior corporate banking executive in a multinational anticorruption probe over industry-wide practice of hiring the sons and daughters of Chinese officials by leading financial institutions.

Represented a Japanese corporate executive with respect to allegations of anti-trust and FCPA violations.

Represented a Dutch banking executive with respect to allegations of OFAC violations.

Engaged as an expert witness on OFAC Iranian sanctions in connection with a confidential arbitration matter.

Represented a Swiss-based bank in connection with an investigation by the DOJ and IRS involving allegations that bank assisted U.S. taxpayers in committing tax fraud through use of undisclosed offshore accounts.

Represented leading investment bank in connection with a regulatory investigation and related civil suits concerning market timing and late trading. The DOJ and SEC took no action against the client.

Represented former partners and managers of a Big Four accounting firm serving as witnesses for the government in the largest criminal tax trial in US history.

Successfully defended a major appraisal services provider in class-action litigation alleging that the company provided fraudulent appraisals in violation of the Real Estate Settlement Procedures Act and California state law. The case was dismissed with prejudice for lack of standing.

Acting as Claims Counsel for the Financial Oversight and Management Board for Puerto Rico, charged with responsibility for investigating and pursuing potential litigation claims arising out of the fiscal debt crisis of the Commonwealth of Puerto Rico.