BACK TO FIRM NEWS 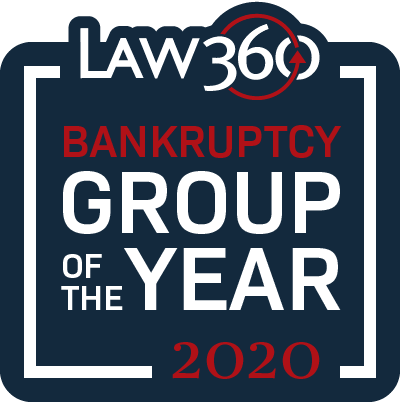 Brown Rudnick has won Law360’s 2020 Bankruptcy Practice Group of the Year award for its landmark matters and general excellence, selected as one of only five U.S. law firms in this category. The annual “Practice Group of the Year” awards received more than 775 submissions from 81 law firms and “honor[s] the law firms behind the litigation wins and major deals that resonated throughout the legal industry in the past year.”

The profile showcased the group’s versatility during the last year, bringing in new hires as bankruptcy cases spiked and adapting to a new socially distant way of practicing law. "It's been a learning experience, but it's also been a sharpening experience," said Robert Stark, Bankruptcy & Corporate Restructuring Practice Group Leader.

Law360 highlighted Brown Rudnick’s representation of the term loan lenders of Pier 1, where the firm secured $100 million for creditors after the COVID-19 pandemic sent the retailer’s bankruptcy “off the rails.” This case was just another example of how the Practice Group had to respond to disruptions caused by the pandemic. The prepack plan that Robert Stark and the Brown Rudnick team helped negotiate was disrupted within a month as COVID-19 shutdowns disrupted the plan on which they had depended. "We did one of these really revolutionary mothball motions, just stopped the case until we figured out what to do with COVID," said Robert Stark. Pier 1 was able to generate $100 million in tax refunds because of the CARES Act, which was then distributed to the term lenders before the company's liquidation plan was approved in July.

Law360 also noted Brown Rudnick’s ability to handle the most complex mass tort cases, including the Purdue Pharma Chapter 11 case led by David Molton. Brown Rudnick is representing parties with tort claims against Purdue for its opioid sales and is planning negotiations proposed to convert the drugmaker into a public benefit corporation, which will forward its proceeds toward opioid abuse mitigation. "It's been one of the most interesting, creative bankruptcies I've been involved in," said David Molton, Commercial Litigation Practice Group Leader. “[It is a] revolutionary use of bankruptcy law.”

Law360 recognized Brown Rudnick for its involvement in some of the largest bankruptcy cases in the U.S., including serving as claims counsel for the Puerto Rico Financial Oversight and Management Board, acting through its Special Claims Committee, led by Sunni Beville, Managing Director of the Dispute Resolution & Restructuring Department. In total, Brown Rudnick filed more than 250 actions challenging more than $6 billion in bonds issued by the island's government. The Brown Rudnick team is also involved in the representation of the Official Committee of Unsecured Creditors of Chesapeake Energy, led by Robert Stark. Chesapeake is one of the largest Chapter 11 bankruptcies of 2020, with more than $9 billion in funded debt.

Also featured is Brown Rudnick’s representation of the victims of California wildfires in Pacific Gas and Electric's Chapter 11 matter, led by David Molton, as well as the ad hoc committee of child sexual abuse victims in the Boy Scouts of America's Chapter 11, led by Sunni Beville and David Molton.

"We are very strategic, we're very lean, we're nimble on our feet," said Sunni Beville. "At the end of the day it comes down to our creativity and our diligence."

Read the full list of Law360 Practice Group of the Year winners here.